The Newest Numbers and a Vaccine Story

Claire went to her new pediatrician for the first time yesterday, and it was a much better experience than the last doctor. Story to follow, but it's long so I'll put the Claire update first, for those of you who are not interesting in the minutia of the whole thing.

At 6 1/2 months, Claire is 15.4 pounds (30th percentile) and 25 inches (13th percentile). The Dr. was impressed that she is already crawling on all fours. On Monday night, she pulled herself up to standing for the first time! 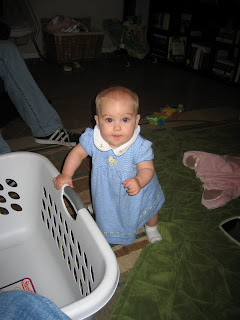 The Saga:
I left the old pediatrician for a couple of reasons. The major problem had to do w/ vaccines. I had discussed the hepatitis vaccine with her and we had agreed not to give it to Claire until much later. But, because that office is poorly organized and no one keeps good records (which I discovered the hard way), Claire was given the shot anyhow. That's irritating in and of itself, but not the worst of it. When I discovered the problem and brought it to the Dr.'s attention, she said, no, the vaccine record the nurse gave me was wrong, and ordered the nurse to make me a new one (she didn't look in her notes or anything, just essentially told me what I wanted to hear.) I should have wised up right then, but my natural instinct is to trust people to be honest. The only reason I knew something was up is because apparently the hep was part of a combo vaccine, so when the nurse removed it, she also took off the other shots in the combo from my records. So she basically erased all the November shots from my copy of Claire's vaccine record--uhm, I was there, I watched Claire get a shot in November, and now my records say it didn't happen? Not ok! So, again, when I brought this new discovery to the Dr.'s attention, she basically took 20 minutes looking through all their various records--which were all different--to decide what they had and had not injected into my daughter. I finally got what I can only hope is a correct record of her vaccines. I told the Dr. that I was very "concerned" about what had happened. She kept arguing with me about some vaccine shortage that required Claire to get the one w/ hepatitis. And she also said that while she tries to accommodate peoples desires for alternative vaccine schedules, it is really hard on her nurses.
1st: If there was a shortage and they only had the combo w/ hep, she should have told me at the time and let me decide what I wanted to do.
2nd: The bigger issue is not which shot she got, but that when I asked her about it, she denied it and changed my records instead of trying to find out what had actually happened.
3rd: Do not tell me it is my fault for requesting a change from the ordinary instead of admitting your mistake, especially when you told me delaying the hep was "no problem, we do it all the time, there's no need for her to have that shot now."
That was it, we were done.
And then I come to find out yesterday from my new Dr. that Claire is actually ahead on a few of the vaccines. I told her we were doing a slower vaccination schedule and spreading everything out, and when she looked at my records, she said, "wow, you're not behind, you're actually ahead on some of these!" GRRR!
I have to admit that if I had been checking up on everything, I would have known this. Instead, I told my Dr. my preferences at the beginning and then trusted her to follow that.  So, I learned that if you want something done differently than "normal" you have to continuously pursue your choices, even if you think you have the hippie dippie natural Dr that was recommended by your midwife who gives you a hard time cause you're not completely "green." So, now I have a way less-hippie Dr. who recommends formula but listened to me when I asked for only one shot instead of 2 for this visit! Lesson learned.
Posted by Rechelle at 7:54 AM