Time For an Update!

It's been a while since I wrote, so I have quite a bit to update on.
Claire had her first session of swimming lessons and she loved them! She was one of three in the class. The other two kids were 5 year old boys, and she was the only one that passed on to the next level! In fact, when I went to sign her up for a new session, I had to have the aquatics director do it because she is technically too young for the next level! She starts August first and it goes for two weeks.
If you ask her how old she is, she replies, "Two and three quarters!" It always makes people laugh, I think because she's still pretty small but when she talks she is so precocious! Strangers don't know what to make of her. They always say, "She's how old?!" We joined this amazing gym that has a great childcare program, and Claire loves it. She is always begging to go, and cries if I pick her up too soon. As she becomes exposed to more kids, however, she is starting to experience some unkindness. Just today at the pool she came up to a group of older girls (maybe 6 year olds) and asked to play. They told her no and then ignored her. Claire came running back to me in tears. Poor girl! She loves people so much, and doesn't understand why anyone wouldn't want to play with her! I also witnessed another girl her age (also at the pool) tell her that Claire couldn't be her friend. It's sad to think that even so young we are faced with such rejection! But she's a trooper and seems to bounce back from these encounters. It hasn't stopped her from approaching new kids and making friends!
Jude is growing up more and more every day. He almost stands on his own now without holding onto anything. He's becoming more talkative (finally!) He also has some new parlor tricks: He can give a high five, wave, dance to music, and sometimes he pretends the little plastic goat is a phone and has a conversation. He will be 9 months next week, and still has no teeth- not even the beginnings of any. He is finally sleeping better, to my great delight! He is still super cuddly and super smiley. The childcare workers at the gym and church all love him and threaten to not give him back when I come to pick the kids up!
Recently we have had a few grand CO adventures. We visited The Cave of the Winds a few weeks ago. We were able to take a neat tour through the cave with flashlights. It was pretty fun. Then, this last Saturday we drove to the top of Pikes Peak. It was gorgeous...it took our breath away (or maybe that was the fact that its up so high there's no oxygen!) It was 90 degrees below at home, but at the summit it was 48 and sleeting! Next weekend we will be traveling to Durango, CO to visit friends. They live in a beautiful aspen grove at 9,000 ft. We're so excited!
Nap time is almost over, so I'll close with a photo we took after our cave tour. We love you all! 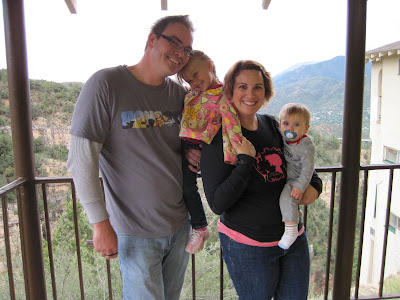 Posted by Rechelle at 1:10 PM No comments:

An Exercise in Futility

I filmed one minute of an ongoing endeavor that, so far, is 10 minutes and counting!
- Posted using BlogPress from my iPhone

Me: "Does your belly have enough room for that monkey bar?"
Claire: "Yeah, right there. [points to the very top of her stomach] The monkey bar will fit right there. "

Upon seeing an RV on the road: "Cool house. I didn't know they made houses to drive. "

After spinning: "My head was like, 'whoa, what are you doing?!'"

In reference to somebody having to go home. "Oh Mama, that's really totally not neat!"


- Posted using BlogPress from my iPhone

Hooray! We got an iPad! And these are the first pictures taken with photo booth: 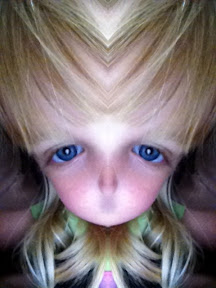 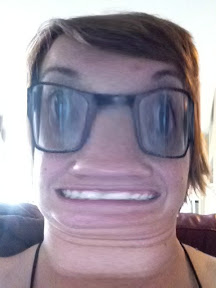 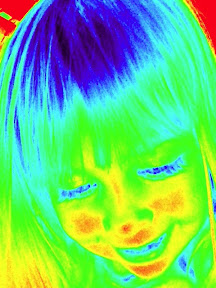 This one is super creepy! 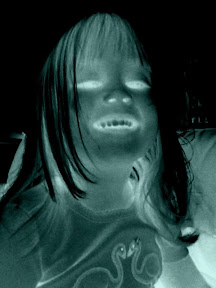