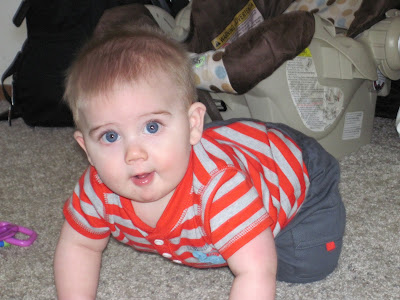 Our little man is now six whole months old! Recently he has changed a lot! He can army crawl like crazy, and is flirting with the real deal. We had to move his mattress down because he can now pull himself up onto things. And he's also outgrown the infant car seat and graduated to an umbrella stroller! Yikes!
He is also eating solid food now. It's been two weeks since he started and he can already put down an entire 4 oz pouch of food! (My food processor broke, and while I'm awaiting replacement parts, I've been buying this baby food at Target.)
Another development: babbling! He says "ba ba ba ba ba" with such delight! I was wondering when he was going to get around to this milestone. Although, I must admit to being a little relieved that he is a little slower with the speech/language development. Is that bad? (Especially for a speech pathologist!) It's just nice that he's a bit more on the mello, independent side. The way Claire inundates us with her constant stream of talking talking talking can really be tiring!
Here's Jude in his first swim suit! We're going to an indoor pool tomorrow and I'm excited to see how he does. 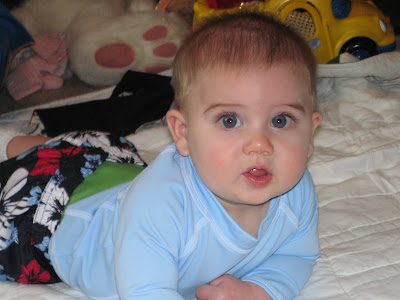 My very favorite new thing: He sleeps through the night!! It was a long process getting him there, but it's done now! We slowly faded out our coming in when he woke, and toward the end I would go in once when he first woke up and then just let him cry. The longest he ever cried was about 45 minutes. He still does wake up sometimes, but instead of crying he talks/plays for a while and then goes back to sleep on his own. It still does wake me up, but doesn't require me to do anything but listen for him to go back to sleep, so I'm happy!
(On a side-note, Claire sings The Beatles song Hey Jude to her brother and it's pretty adorable!)
Posted by Rechelle at 2:08 PM